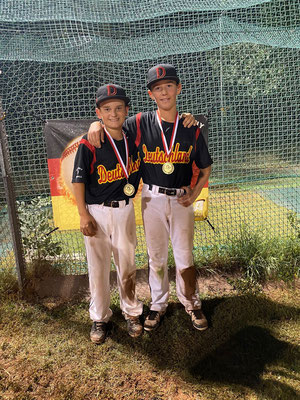 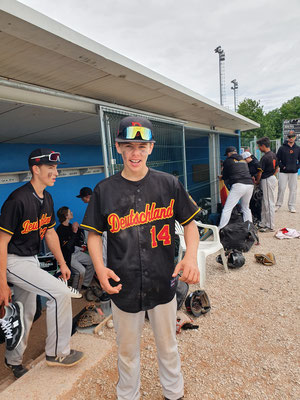 July 11, 2022 - We the Rams coaches CONGRATULATE two of our under 12 players Nici and Liam. Not just for being nominated to the under 12 Germany national team! They are both now WBSC European Champions! The U12 German national team won the European Championship in extra innings last Saturday. Both Liam and Nici started every game that was played in the EM. They both played unbelievably the entire tournament. They both pitched, they both had numerous hits/runs/RBI's and filled not just the leader statistics for the German team, but also for the leader statistics for all the teams. Liam played 3rd base and had numerous great plays there and great hits. Nici took his game to another level during the tournament, hitting numerous singles, doubles, triples, and a homeruns. Nici was also Germany’s closing pitcher, leading the team with 11 strikeouts, many of those strikes came in the semi final and final! Nici's  exceptional performance did not go unnoticed by the National team trainers, they nominated Nici to play with the U13 National team prospects in Prague later this summer.

For a deeper look into what Nici (Nicholas) and Liam achieved in the last week, here is the link to team Germany on the European WBSC webpage: https://www.wbsceurope.org/en/events/2022-u-12-european-baseball-championship/teams/22408

Over the last ten years Rams baseball players have always been successful in Berlin, Germany, and across Europe. The last 8 months have been no exception. In preparation for the 2022 season (April to October) training here in Berlin started in October 2021.  Yes they train the entire year including the winter.

To prepare for the 2021 season, many of our Rams players traveled around Europe, the U.S.A., the Dominican Republic, and the Canary Islands off the West coast of Africa during the cold German winter months. Here are just some of those journey’s and some of the results of the tournaments our players were involved in.

Rams U12 Liam was in Nettuno, Italy in late October early November with the 2022 U12 German national team prospects playing in the European Boys League Tournament. The team took 2nd place overall.

Rams U15 player Kyran was in Puerto de la Cruz in December and played in the Tenerife winter league games.

Rams U15 player Noah was in Florida in late December early January and took part in the USSSA All American games at the Space Coast complex.

In January  Rams Players Kyran and Johann were invited to Paderborn for the annual German “Winterball” (tryouts for the 2022 U15 National teams). Both Johann and Kyran were nominated to play in events in 2022 for Germany.

In February and March Kyran was in Sosua/Cabarete, Dominican Republic training with U15 National team player prospects.

Note: Due to the Covid Pandemic there was not a tournament in Cataluña 2021. The last tournament was in 2020 right before the Pandemic hit Europe. In 2020 the German U12 prospects won the tournament. Rams player Kyran was on that 2020 Championship Team.

Rams players George Simon and Noah were in Vienna playing baseball 5 at the beginning of March.

In March/April Johann was in Sosua/Cabarete, Dominican Republic for training  with other U15 National team player prospects.

Justus and Leander were in Remini, Italy over the Easter break taking part in “Easterball” training there.

Over Pfingston Two U12 Rams players (Nici and Ben) played for the Berlin Auswahl team in Bonn for the German Lander Pokal. Also over Pfingston in Bonn the U18 Berlin Auswahl team played, five of the current Rams U15 players were nominated to the U18 team. They were Johann, Joshua, Kenny, Leander, & Kyran. In Bonn Johann pitched an amazing game there and the other Rams U15 players proved they are ready for U18 baseball in 2023.  For the U12 part of the tournament, Nici was awarded “Best Pitcher” U12 of the entire tournament!

The following Rams players were nominated to the 2022 U15 Berlin Auswahl team, Noah, Justus, Leander, George Simon, Joshua, Johann, Kenny, and Kyran. The Berlin team played a triple header on Saturday and a double header on Sunday, both days it was in the upper 90’s but that did not stop our Rams playersplayers. Rams players lead the way for the Berlin team the entire weekend. They returned to Berlin with their 3rd in Germany bronze medals.

Nici and Liam were Trebic, Czech Republic at the end of June beginning of July preparing for the U12 European Championships in Vienna Austria.  Well we know how that went for them!

There are so many other Rams players that we have that continue to work hard all the time. Without them we would not be a team. They are Lilli, Ben II, Lyam II, Hendrik, Levi, Hunter, Kentaro.

Here in Berlin the Rams have been playing a very good 2022 season so far, we still have a handful of games left until the end of the season in October.  Let’s see where we stand then!

For those that do not know the Rams track record in Berlin over the last ten years in the BSVBB. Here it is.

To be able to succeed in Baseball in Berlin in the under 15 and below divisions like the Rams have.  A group of dedicated coaches who have been working with Rams players over the years is the core to the success the Rams have had. A HUGE Thank you  to those coaches and trainers we have had over the years, John, Dave, David, Angel, Jeffrey, Derek, Cameron, Maikel, Josh, Gregg.

We know when players leave the Rams program and go to other programs at the U18 level, Rams players are instant game changers when they walk on the field for those teams. History proves that over the years the teams who won the Berlin U18 Championships were stacked with former Rams players.

March 20, 2017 - Our Schüler Ram, Jeremy Trzeciak, had his last tryouts this past weekend to make the German U12 National baseball team. After two days of intense baseball, Jeremy put all of his hard work into play. After all was said and done, Jeremy had reached his dream and was selected at the end of the tryouts. The rams coaches congratulat him on a job well done. Even though we cannot take credit for his accomplishment, since he came to us already with the determination of making the national team, we will ride along on his bandwagon of success. Jeremy has shown what it means not to give up! Now that you made it, keep working hard because the others sure will be. Along with Jeremy, 10 other players were chosen and another 5 will follow to fill out the team. Jeremy has the following major events in front of him now: U12 European championships in the Netherlands and the U12 world championships in Taiwan. All the best of luck and success.

Our T-Ball team won the 2016 Championship in the BSVBB - Baseball und Softball in Berlin und Brandenburg. Big congratulations to our baseball "Nachwuchs"! 2016 was a successful year for Berlin-Rams overall, as the little league team (Jugend, age 13-15) also won the Championships in Berlin-Brandenburg, and the minor league team (Schüler, age 8-12) got second place.
The Rams are open to anyone who would like to play baseball, the children do not have to attend JFKS school. Email: scjfks-rams@berlin.com

Congratulations to Baseball Rams on their indoors victories!

The Rams Kinderliga team defended their Championship title from 2015 and won the Berliner indoor baseball Championship 2016!

October 4th, 2015 - "What an incredible, chest-thumpin' thrill to see former player Max Kepler from our Berlin Little League days step into the batter's box as a Minnesota Twin. (Max was also this year's Southern League MVP for his champion Chattanooga Lookouts.) Welcome to the SHOW, Max - you belong up there!"

This is what Mr. Chad Felt, Max's former LL coach and JFKS teacher, wrote as he watched the game on October 1st in Cleveland, Ohio. Mr. Felt kindly shared with us not only this photo, but also team photos from over fifteen years ago, showing Max Kepler's baseball beginnings in Berlin: Mr. Felt coached him with Dave Chilton (Cubs), Karen Wingo, a JFKS elementary teacher (Devil Rays), and again with Karen and David Rosenfeld for the Marlins. Incidentally, three others on that Marlins team went on to play college ball: Zach and Nate Ferster (Baldwin Wallace College) and Momo Felt who pitches at Dickinson College.

Max Kepler first attended John-F.-Kennedy-School in Berlin, and from 2008 lived in Regensburg, where he played for the Buchbinder Legionäre. He signed with the Twins in 2009, and after six years in Minor League was called up to the Major League in September 2015.

Congratulations from all of us at SC JFKS Berlin to Max Kepler!

September 2, 2014 - From the 2015 season on, the Rams will be adding a division in the BSVBB (Berlin/Brandenburg Softball and Baseball League) "Schülerliga". These players are in the age bracket from 9-12 years. The German baseball league goes by birth year only, which means that the following years are eligible: 2003/2004/2005/2006 for 2015. This will be in addition to the normal American Little League Baseball program. If you have any questions please contact Coach John Dillon.

September 23, 2013 - For the first time in history of our baseball program, the SC JFKS baseball team Rams participated in German Baseball Youth Championships 2013 (Deutsche Meisterschaft Jugend) in Paderborn. The boys and coaches travelled to the tournament hosted by Paderborn Untouchables on September 21-22, 2013. The best eight teams in German youth baseball competed. The Rams played against the Sollingen Alligators, the Buchbinder Legionäre, and the Stuttgart Reds. They seemed to be evenly matched in each game but had some bad luck so this year it was last place in the tournament. But, needless to say, we are proud of what the Rams achieved this year. Great job, and keep it up!

Please contact us by email, the office is closed until further notice.

(The office is closed during school holidays).